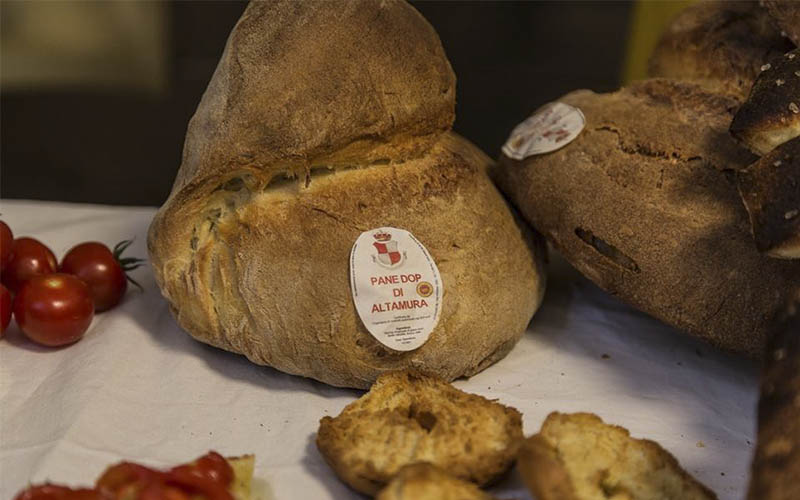 ‘Pane di Altamura’ or Altamura’s bread is one of the oldest bread varieties in Italy, with records showing the evidence of the bread being produced in 37 B.C. It is a bread that comes from Altamura, a town in the Alta Murgia region of Puglia in South Italy.

The bread has a characteristically compact and crisp crust with a soft centre that is created in two typical forms, either flat with a cross on the top or high with a large knot above the base. Because of its long-standing production from the town it comes from, the bread must adhere to the regulation of the PDO mark, the bread therefore must have a crust of at least 3 millimetres in thickness, and a crumb full of small holes, that indicates a successful leavening.

The bread was first produced for farmers and the ancient people in the area of Alta Murgia as the thickness of the crust enabled the bread to last up to a week which was more than most breads at the time that would not last long journeys made by farmers. Although the bread is versatile in its uses, it is best appreciated alone or with a simple drizzle of olive oil and sprinkle of salt.

The bread that comes from the beautiful town in Puglia in the south of Italy has been recognised since 2003 with a ‘Protected Designation of Origin’ mark that ensures the product obeys long-standing recipes using ingredients from the town and following strict methods of production which must take place within the Altamura region.

Still to this day, the bread is produced by local bakers in wood and stone ovens using recipes that have been handed down through generations.