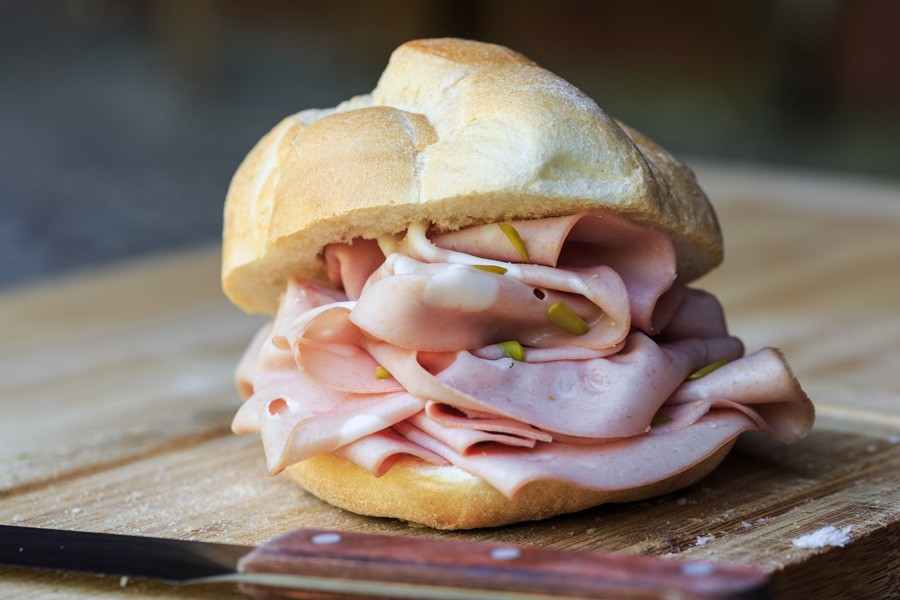 Happy Mortadella day! – October 24th is definitely the best day of the year for mortadella lovers as they celebrate #MortadellaDay. This is no random date, it marks an important day in the history of mortadella. According to historians, on October 24th, 1661 Cardinal Farnese issued the edict that regulated mortadella production in Bologna, Italy. Even if the  roots of its production date back to the Romans, this year Mortadella “only” officially celebrates 359 years. Veroni, the historic cured meats producer that imports 100% Italian-made salumi to the US since 2016, is renowned in Italy for their expertise in mortadella making and not to mention a record breaker for giant mortadellas. Here are 10 secrets about mortadella Veroni’s going to spill to help you better enjoy #MortadellaDay.

An A-list Celebrity of the Middle Ages

Mortadella has an amazingly long history. An appreciation for this cold cut by ancient Romans has been mentioned in many historical writings, which proves that by the Middle Ages this cold cuts was enjoyed throughout all of Europe. It even became so praised that a headquarters was established in Bologna to ensure the quality and authenticity of all manufacturers and in 1661 a law was passed against counterfeit mortadella in order to ensure that the production process adhered to strict guidelines.

The Mysterious name… where does the name come from?

There is much debate over where exactly the name ‘mortadella’ derives from. Some trace the name back to ancient Roman times with the production of mortadella found depicted in art from the period. Since the mortar and pestle were often used by Romans to knead pork with spices, it has been suggested that the name originates from the word ‘mortarium’ which means finely minced meat in a mortar. The second hypothesis instead derives the name from the word ‘myrtatum’, the Latin word for myrtle – a spice used in place of pepper, which was one of the main ingredients in a sausage called ‘farcimen myrtatum’. Farcimen myrtatum was already a well-known and widely appreciated sausage and can be found in literature dating as far back as 23AD.

A recipe that has stood the test of time

Mortadella is produced using long established, protected methods. Only the highest quality of pork is used, which is reduced to a fine grain with a meat grinder then diced fat (considered the most prized fat) from the pig’s throat is added. Depending on the desired outcome, salt, pepper and other flavors are added and then the mixture is stuffed into a casing and cooked in dry-air stoves for a few hours or a few days for larger mortadellas. At the end of the cooking process, the product is quickly chilled by means of a cold-water cooling process, then it is left to rest in a cooling cell before being sliced and enjoyed.

The bigger the mortadella, the better the flavor

The saying goes ’The bigger the mortadella, the better the taste.’ Mortadellas with larger diameters require a longer cooking process, which in turn helps enhance its flavour. This fuelled the Veroni brothers’ desire to create the world’s biggest mortadella. The last standing record for the largest Veroni mortadella was in 1996 when the weight reached an astounding 2.680kg with a circumference of 2.30m and a diameter of 75cm. Even till this day those dimensions have never been surpassed. Veroni was the first company to bring the largest 100% Italian made mortadella to the United States for an event in Orlando in 2019. Slicing a giant mortadella is a job for experts, so fittingly a charcuterie specialist in mortadella cutting came directly from Italy to get the job done.

How to spot high-quality mortadella

Apart from personal choice, there are many other aspects that can help you identify a high quality mortadella. According to Veroni, you spot a good mortadella by:

Veroni takes pride in using the High-Pressure Processing (HPP), an all-natural and environmentally friendly method of food processing. This method is when previously packaged food is subjected to elevated hydrostatic pressure for a few minutes. The pressure inactivates most vegetative bacteria, retains the food’s quality, maintains freshness, flavour and texture. During the process, the product is packaged under a vacuum in a flexible container and is loaded into a high-pressure chamber filled with pressure-transmitting water. The water in the chamber is pressurized with a pump and is transmitted through the package to the food itself. Since no heat is utilized, the aromas and flavors are retained, thus improving food safety.

Don’t be fooled by first impressions

Contrary to its appearance, mortadella contains just 288 calories per 100g, a lower count than a plate of pasta. There are only 60-70mg of cholesterol in 100g of mortadella, which is the same level found in white meats. The cured meat also contains high levels of vitamin B1, B2, iron, zinc and other minerals making mortadella a guilt-free pleasure.

The best way to preserve it

When pre-sliced mortadella needs to be preserved, the best way to ensure its freshness is to store it either in an air-tight container reducing the exposure to oxygen and contamination, or to wrap it in aluminium foil. Make sure to wrap it as carefully as possible without letting any air get in. These steps will ensure product longevity and help retain its characteristic aromas and flavors.

How to savour mortadella

Mortadella is an amazingly versatile cold cut that can be used in the simplest ways such as a fresh panini and is also great presented on an antipasto board with cheeses and finger food.

The cured meat can also be added to countless recipes to add more flavor such as pasta, sauces and pizza toppings. Discover our many recipes that use mortadella as well as our other Italian cured meats on our blog.

How to prepare the perfect Italian aperitivo with mortadella

– Flatten the slices of bread using a rolling pin, then spread the ricotta over bread slices.

– Sprinkle each piece with the pistachios and layer with slices of mortadella.

– Roll up each slice tightly, cover with food film and place in the fridge for two hours.

– Remove from the fridge, slice and enjoy.