Getting to Know Pancetta 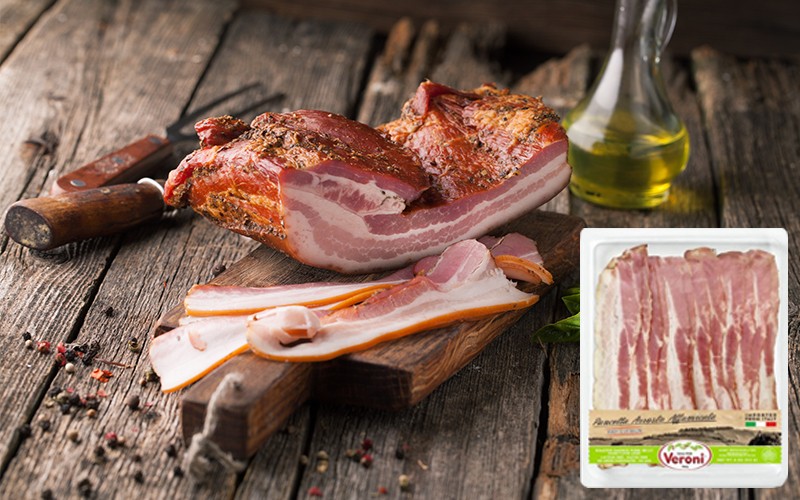 Here at Veroni we offer an enormous range of traditional cured meats that also stray away from the commonly popular ones such as prosciutto or salami. This week we wanted to dive into pancetta, how it’s made and of course, how best to enjoy it!

There are two main varieties of pancetta, either the ‘arrotolata’ meaning rolled, or ‘stesa’ which is flat. Pancetta arrotolata is usually enjoyed sliced fine and used as other cured meats such as on an antipasto board or in a sandwich. The stesa, however is often diced and used in cooking recipes such as rich pastas.

From these two versions steam other delicious variations such as pancetta coppata – pancetta arrotolata that has a centre of coppa, or pancetta affumicata – salt cured and smoked, resulting in a cured meat similar to bacon.

Pancetta is created using the belly of the pig which is salted and then marinated in a tub of brine for a period at a low temperature in an environment with high humidity. The brine usually consists of salt and other spices such as black pepper, chilli, garlic and rosemary.

After salting and brining the cut of meat, it is rolled with the http://www.freecast.org/canadian-pharmacy layers of fat on the outer core of meat. The rolled meat is then tightly packed into netting or casing at which stage it can be smoked depending on the desired flavor outcome. At this point the meat roll is left to dry for 3-4 weeks to cure fully.

Pancetta is a really versatile cured meat that can be used just as you would bacon to add a richer flavor to meals or you can use it to create a mouth-watering carbonara if you can’t get your hands on the traditionally used guanciale.