Carbonara Day: the legend of the world’s most loved dish 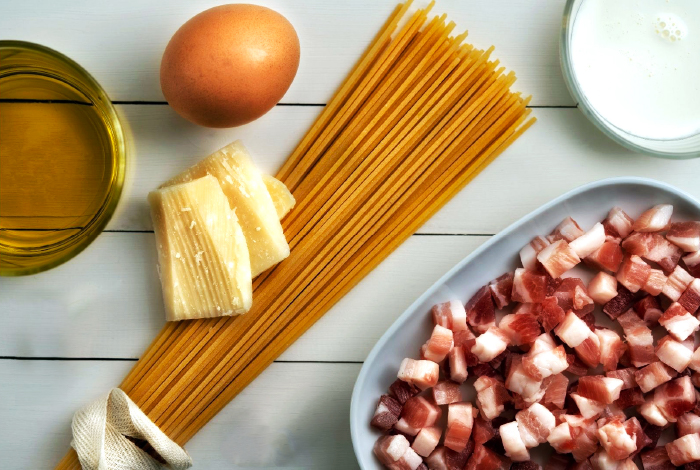 Typical of the cuisine of the capital, Carbonara is one of the most popular first courses, not only in Italy, but in the world. And in addition to being one of the most imitated dishes, its recipe is shrouded in a veil of mystery regarding its origin.

The history of carbonara

There are  many stories, but the truth seems to be in a legend, when there was no recipe for this dish, until it began to appear in the Romans houses starting from 1944. This date represents a watershed, giving us a precious clue as to who to attribute the invention of this tasty dish. It would seem, in fact, that the Allied soldiers engaged during the Second World War on the Reinhard line, between Lazio, Molise and Campania, had fallen in love  with the typical “Cacio e ova” pasta from Abruzzo. It was natural, at least according to what is said between history and legend, to add the smoked pancetta (called also bacon) imported from the United States.

The elements of carbonara

Carbonara was therefore born from flavors that reminded American soldiers of “home”. Once the Romans discovered the recipe, they decided to make the recipe their own…To the point that, today, no one would dare to question its geographical authorship.

The truth, however, is that carbonara is not a 100% Italian recipe. First of all, it is important to reaffirm that carbonara is strictly prepared with smoked pancetta, cut into strips or diced and sautéed slowly until it becomes slightly crunchy. Among the other ingredients, the most important thing is to find the right proportion of egg yolks, grated pecorino (better if Roman DOP) salt and pepper. And at the end a little bit of cooking water. Also, It is important to remember the absolute prohibition of adding cream! Finally, the rules for preparing the perfect carbonara, as the experts specify, are about size of pasta:  it must be   long: therefore, green light to bavette or bucatini, but to be on the safe side and make no mistake, the ideal it’s always about choosing spaghetti.