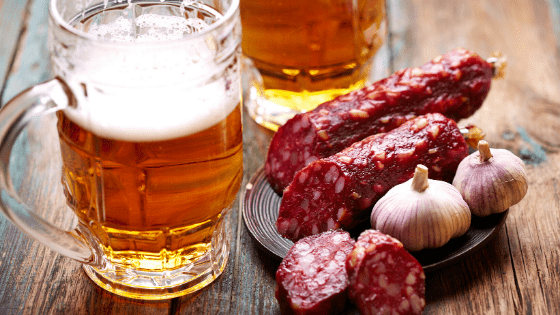 Salami and beer, what more do you need in a pairing? We know that adding cured meat to the mix can only make a cold, crisp glass of beer better. Just as beer has a long history so do our wide array of Italian cold cuts, so we wanted to show you a few of our meats paired with different styles of beers that are particularly popular among the beer loving community.

PALE LAGER WITH SALAME TOSCANO: Salame Toscano is a traditional Italian salami hailing from Tuscany and infused with a mix with salt and spices such as fennel. This is the perfect salami to pair with Italian pale lagers such as Nastro Azzuro or Moretti.

PALE ALE & SALAME CALABRESE: A salami obtained from processed, salted, cured and encased pork our salame calabrese is characterized by its spicy taste it’s produced according to the traditions of Calabria. This being said, this spicy salami pairs perfectly with a pale ales such as Sierra Nevada Pale Ale or Lagunitas Lil Sumpin Sumpin Wheat Pale Ale.

IPA with SALAME DI PARMA: This salami is created with processed pork, seasoned with salt and pepper and encased according to local tradition making it a mild salami. The assertive flavor of IPAs makes a great choice to better enjoy this type of salami due to its ability to cut through rich foods with strong flavors.